Sharon Webb
Wow what an amazing place , the cottage we stayed in was perfect for my husband 50th birthday. We both had an amazing time and cant wait to return 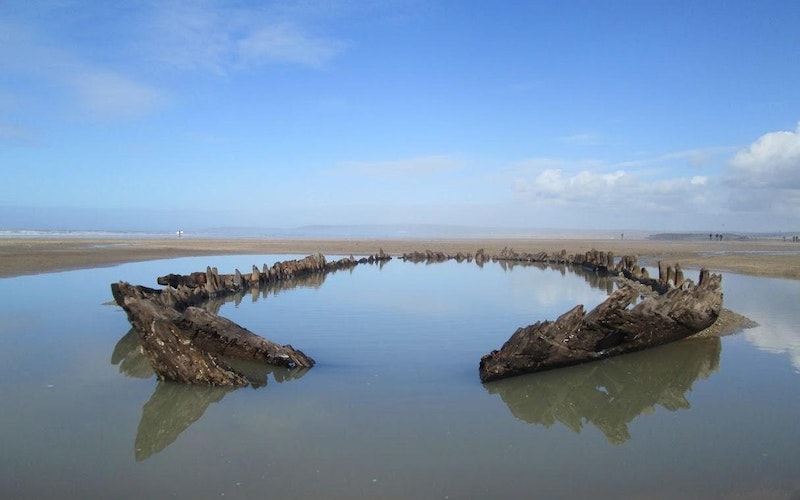 Westward Ho! is steeped in history, our beautiful self catering holiday cottages at Westward Living are located near by to the glorious sandy beach at Westward Ho! which stretches for 2 miles along the beautiful North Devon coastline. You can walk to the beach via our direct access onto the South West Coastal Footpath or its a short drive in the car about 5 mins.

Did you know that every few years the shifting sands of Westward Ho! beach reveal the remains of a wooden ship which has been seen intermittently since at least the mid 19th century, when it was described as “a very old wreck”.

The oak-framed ship lies parallel to the pebble ridge, about 650 metres to the seaward side.  It is around 25 metres long and 7.6 metres wide with semicircular bows (at the north end) and a more oval stern.  The planking is joined to the frames by trunnels (wooden nails, which swelled as they absorbed water).  Trunnels were used in shipbuilding from prehistoric times until the late 18th century.

As a wooden vessel would be driven ashore to the limit of high water and would settle into a scour pit, we can assume that the ship ran aground at the base of the existing pebble ridge.  The average landward movement of the pebble ridge has been estimated at about one metre per year over the past 125 years – so the position of the wreck suggests that it was beached at the end of the 17th century.

It has been suggested that it could be the wreck of the Salisbury, which was lost on Northam Burrows in 1750, or the Sally which wrecked on Northam Sands in 1769.  No other wrecks of this size are recorded until the mid 19th century, when the Pace was wrecked on 28th December 1868, but was later salvaged.

Why not bring a metal detector with you and have a fun day out exploring the beach at Westward Ho!